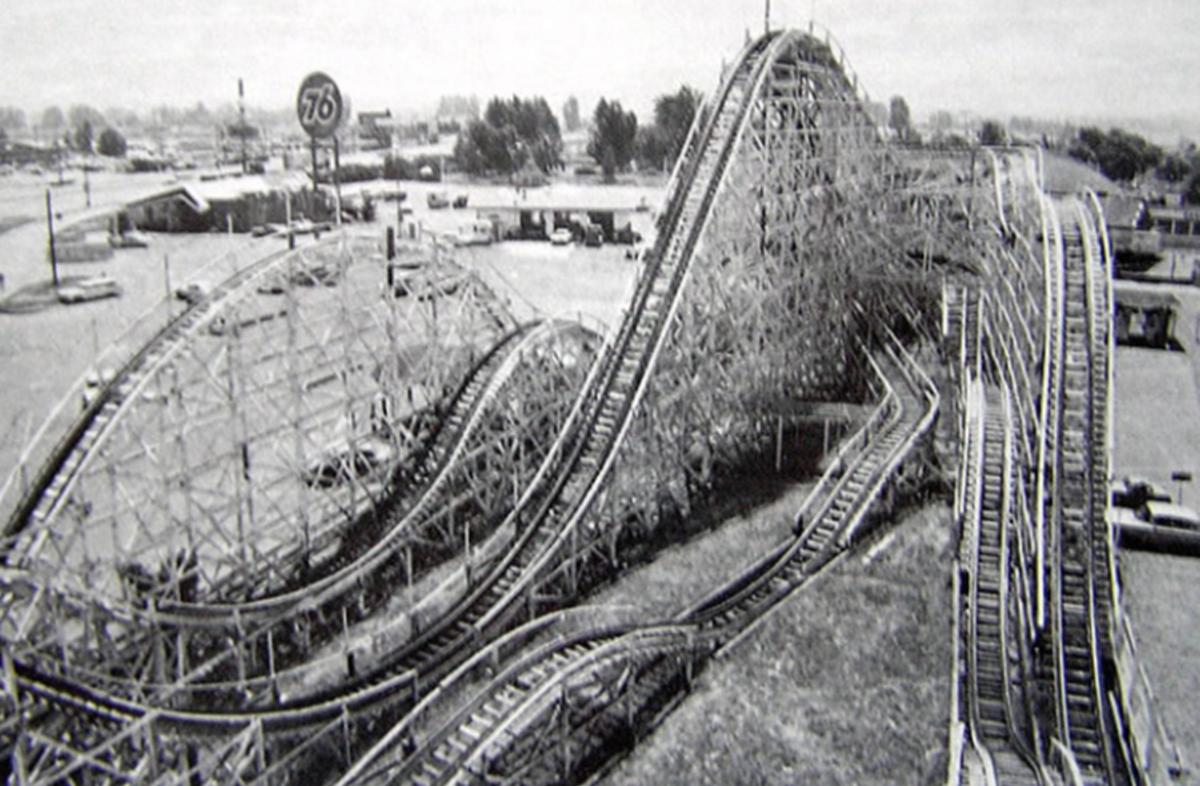 Linwood Park (so named for its Linden trees)

The year 2002 marks the 118th birthday of Linwood Park, originally Evangelical United Brethren, now United Methodist-oriented; it is a semi-private family park, owned and operated by the Linwood Park company, maintained by the Park Superintendent with admittance gate fees collected by the Board of Directors during the season from early June until Labor Day.

Just east of downtown Vermilion on Rt. 6 on the north side of the road are an easily overlooked apartment complex, a gas station and a bank. On this acreage, as early as 1870 stood a picnic grove called Shadduck Lake Park. This pleasant grove became popular because the tree shaded area was accessible to horse-drawn buggies.
In 1906 George Blanchat purchased the park and named it Crystal Beach Park after his wife, Josephine's, description of the "crystal-like" sand on the beach. With rides and concessions added, Crystal Beach opened on Decoration Day, 1907. Along with the transition of ownership and name came other changes; even the square dancing gave way to the two-step. Some of the original buildings for the premier season were a pavilion for dancing and serving refreshments, a beer garden, a shooting gallery and a merry-go-round. Later bowling alleys, a toboggan slide into Lake Erie and a large restaurant were added. By the twenties, Crystal Beach featured such popular rides as the Bug, the Caterpillar, the circle swing called "Airplanes" and the Crystal Thriller roller coaster.Rivaling the big thrill rides in popularity was the dance hall, the Crystal Garden. This hall played host to well-known bands as Guy Lombardo, Duke Ellington, Count Basie, Cab Calloway, Les Brown, Sammy Kaye and Lawrence Welk, to name just a few. This one feature drew people from Cleveland, Columbus and Toledo. As the big bands flourished, so did Crystal Beach. Certainly ballroom dancing provided a central attraction to the many amusement parks of that era.George Blanchat passed away in 1938 and James Ryan, active at the park since 1929, took over as manager for Mrs. J. Blanchat. Jimmy Ryan held that position until the park's close at the end of the 1962 season.
McGarvey's
Many people do not know, or remember that the restaurant known as McGarvey's was originally built, owned and operated by Charles Helfrich. That was in 1929, shortly after the new bridge was built across the river. The old bridge crossed a little south of the present location.Mr. Helfrich operated a small boat and canoe rental business on the east side of the river. The proposed new bridge nearly touched his building and also diverted traffic away from it. So he purchased the land just north of the new bridge and built a restaurant and boat rental business there.  Home cooked dinners, fish, chicken, sandwiches and homemade pies were the first attractions. Also served were the almost unheard of hot fish sandwiches, on Schwensen's bread. The business prospered and Helfrich's became a busy place.  The canoe and boat business were also thriving. Canoeing on the river was a popular pastime in those days, especially on Sunday afternoons.In 1934 Mr. Helfrich died and two years later Mrs. Helfrich sold the enterprises to Charlie McGarvey's. After his death, Mrs. McGarvey sold her husband's business to Charles Solomon, son of Eddie Solomon.  The restaurant was one of the most well known eating places along the lake shore, popular with both "landlubbers" and boaters.  In the year 2000, the Vermilion Port Authority purchased the McGarvey's property and razed the building. The property became a transient marina and restaurant named Red Clay on the River, now Quaker Steak & Lube.

Louis Wells, a Cleveland contractor, began the Vermilion Lagoons project as a means of keeping his men busy during the Great Depression of the 1930s. By 1931 the first house and the beach house had been built and the lagoons were dredged and most of the wooden piling secured.The first house was located just to the south and west of the beach house on the Erie Lagoon and belonged to a Mr. Comstock, a real estate salesman and employee of Wells Realty Company.  A "building boom" took place in the mid 1930s and by 1940 all of the houses on Anchorage Way, at least one house on Willow Lane, and most of the houses on the portion of Portage Drive located on the north side of the Erie Lagoon had been constructed. The first year-round residents, the Lester Kishman family, moved into their new home in April of 1937.The Lagoons was not mostly permanent residents until the 1950s. Another "building boom" began during this period and it was at this time that Park Drive, the last road to be developed, experienced growth.  To the townspeople of Vermilion, the people of the Lagoons were often known as "swamp dwellers" or "swamp rats." They were also thought to be slightly crazy for wanting to live so close to the water. At times, this has indeed meant being in the water rather than by the water.Along with the residential development came the recreational in the form of the Vermilion Yacht Club. Mr. Wells deeded the land on the tip and south side of Anchorage Way to the Yacht Club with one stipulation - no alcoholic beverages could be served or sold on the premises of the club itself. The originators of the Vermilion Yacht Club were all former members of the Cleveland Yacht Club seeking a more secluded anchorage. Besides the obviously great boat dockage and the beach on the Lake, the uniqueness of the Lagoons is in the uniformity of the architecture of all buildings found there. The charm of Cape Cod homes, all white with dark roofs and shutters, amid trees (mostly all willows in the beginning) and fronting on lagoons is undeniable and gives to the Vermilion Lagoons its own inimitable flavor.

NEXT: Articles On Vermilion Ohio's History